Is gigabit cable internet as good as fiber?

It’s generally accepted that fiber internet is superior to copper-based cable internet in nearly every way. The one exception is that there are still areas where cable infrastructure already exists and fiber-optic cable is unlikely to be installed in the near future. In these areas, the cable internet telecommunication standards DOCSIS 3.1 and DOCSIS 4.0 can act as a temporary solution.

Data Over Cable Service Interface Specification (DOCSIS) permits the addition of high-bandwidth data transfer to existing cable infrastructure. The most recent versions (3.1, released in 2013, and 4.0, released in 2017) facilitate gigabit speeds over cable. However, any suggestion that simply purchasing a DOCSIS 3.1/4.0-compliant modem will give you fiber internet performance is simply false. For numerous reasons, DOCSIS is not and will never be a lasting alternative to fiber internet.

The real trouble comes when DOCSIS 3.1/4.0 is treated as a mitigation strategy and as a shortcut to gigabit, rather than investing in the upgrading of telecommunications networks to full fiber-to-the-home (FTTH) internet, aka the kind of work Ting does. Our internet needs have changed, and old copper networks are struggling and breaking under the load. That’s why copper is the past, and fiber is the future.

DOCSIS versus fiber: not the same technology

The internet exists because of supporting infrastructure. Miles and miles of fiber backbone connect data centers across the country to local cities and towns. Why is fiber used for the main infrastructure? Because it supports not just the greater speeds and bandwidth we need today, but also the exponentially greater demands that will come in the future. In the early days of the internet, this main fiber backbone was connected to the local copper networks initially utilized for landline phones and later cable TV due to availability and cost.

We’ve come a long way from cable TV and telephones. Wherever possible, cities and towns are upgrading the infrastructure that services homes and businesses to fiber internet. Those existing copper networks weren’t built to support digital signals and, therefore, aren’t up to the task. We know that fiber is faster (and has the potential for speeds we can’t even imagine yet), more reliable and can even increase property value. “But hold on,” you might ask. “My internet service provider says they have gigabit DOCSIS cable internet. Doesn’t that mean it’s at least as fast as gigabit fiber internet?” In short, no—and here’s why.

Copper (even DOCSIS) has consistency and bandwidth issues 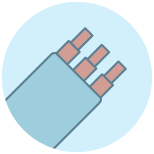 Copper networks are prone to signal degradation over long distances. So over those miles of copper run from your internet service provider (ISP) to your home, you’ll almost certainly experience at best a drop in speed and at worst actual dropouts. Perhaps the biggest speed issue with copper, however, is its bandwidth constraints.

Ever notice how the internet gets slow at night when everyone’s at home on a cable connection? This isn’t just caused by more people being online in your house but is affected by your neighbors as well. That’s because you’re sharing some section of copper wiring with others on your street. Due to copper’s inefficiency, that sharing results in slowdown. DOCSIS 4.0 may allow much higher potential speeds than regular cable connections, but it’s still copper, so this issue remains.

In the DOCSIS vs. fiber battle over consistent speed, there’s a clear winner. With a gigabit fiber connection, your speeds are never compromised. Gigabit fiber is built for transmitting digital information quickly and efficiently. Signals can be transmitted long distances without degradation, and with FTTH, the kind of fiber networking Ting does, you’re getting an end-to-end fiber connection. This means you don’t compete for bandwidth with your neighbors or other users in your home.

DOCSIS 3.1 is not symmetrical (and why upload speeds matter)

Even with DOCSIS, cable’s maximum upload speeds are considerably slower than its download speeds. That means that all those things mentioned above will be negatively affected. With symmetrical fiber internet like Ting, your upload speed is just as fast as your download speed. Businesses, students, video chatters and gamers rejoice!

Fiber is a future-proof solution 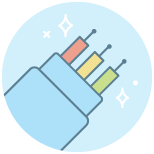 Fiber and DOCSIS 3.1 address the same fundamental issues—people need greater internet access speeds, and the network needs to be able to handle more people and things doing more stuff online. The fact is this: Fiber is a sustainable solution to these issues, with capabilities that will take us far into the future. DOCSIS 3.1 and 4.0 stretch the capability of cable internet to its limit in an attempt to do the same. DOCSIS 3.1 can be a useful stopgap in places where fiber hasn't yet been deployed. However, it should never be considered as a long-term alternative solution in lieu of real innovation. Fiber is built for transmitting digital information. As the volume of information we need to transmit increases, switching to fiber is the obvious choice.

There you have it; when it comes to DOCSIS vs. fiber, the latter is the clear choice whenever it’s available. You can learn more about fiber and how it’s superior to copper in our e-book What is fiber Internet? And to upgrade to the best fiber internet, see if Ting is available in your neighborhood.

Why fiber internet? It meets our current and future needs

Looking for a light-speed internet provider?

The importance of gigabit internet infrastructure